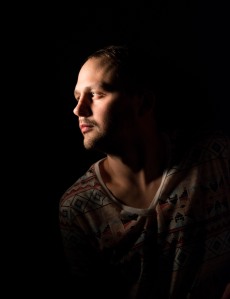 Ezra Dickinson
Ezra Dickinson is a multi disciplinary artist who began dancing at the age of four, trained at Pacific Northwest Ballet for twelve years on full scholarship. While attending PNB Ezra also completed a seven-year apprenticeship in ceramics. Ezra earned his BFA in Dance with an emphasis in choreography from Cornish College of The Arts. Ezra regularly practices and is commissioned in performance/choreography, ceramics, visual art, murals and film. Along with being co artistic director of The Offshore Project and Actually Really, Ezra is also a member of The New Mystics, The Maureen Whiting Company, Murphy/Lashow and HYPERNOVA. ezradickinson.com 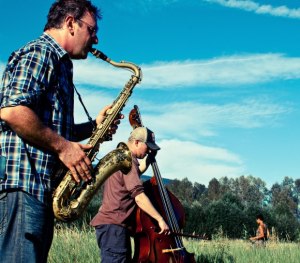 Chris Credit
Multi-instrumentalist, composer and educator Chris Credit has been a fixture on the Seattle creative music scene for nearly two decades. He is a versatile and accomplished woodwind player on the alto, tenor & baritone saxophones, clarinet, bass clarinet, and flute. He has toured extensively through the US and Canada with original jazz-rock band Reptet, whose repertoire includes some Credit original compositions.  He has also composed new music for the Bushwick Bookclub, the Schwa and Motel 5.  Credit received his BM from Cornish College of the Arts in 1998 where he studied with jazz greats Hadley Caliman and Julian Priester.  Credit currently plays with Cataldo, Evan Flory-Barnes, Wayne Horvitz RRCME, Sam Boshnack, Zubatto Syndicate, Beth Fleenor’s WE, The Schwa, and Bubble Control.  He has sailed the high seas performing on cruise ships and has also performed or recorded with Oliver Lake, Steve Cropper, Jherek Bischoff, Paul Kikuchi, Monktail Creative Music Concern, Picoso and Tubaluba among others. 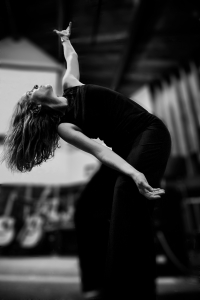 Karin Stevens
Karin Stevens began her training most notably with Pacific Northwest Ballet, Spectrum Dance Theater and The Seattle Children’s Theater. Her artistic lens has been influenced by a diverse movement background and travel, including a theatrical performance experience as a teen in Tashkent, Uzbekistan and a year studying dance in Spain as a young adult. While completing a B.A. in dance from the University of Washington, she was awarded a Mary Gates Endowment for Student Leadership Grant for her work with at-risk youth through dance. In 1999, Stevens began presenting her work and since has completed more than 60 dances. As Director of Dance at Dr Philips H. S., Orlando, FL, 2000 – 2003, she was awarded multiple invitations to present in various national and local dance festivals, including a request to teach and choreograph for The Orlando Ballet School. In 2003, Stevens was awarded a full scholarship and teaching assistantship for the Mills College MFA Dance program. While dancing with the Mills Repertory Dance Company her performance in Molissa Fenley’s, Water Courses, was recognized in the Voice of Dance. Following graduate school, Stevens formed Oakland Dance Encounter, collaborating with local composers and performing in many Bay Area venues. Stevens returned to Seattle in 2007 to form Karin Stevens Dance. 2009 – 2011, her company was established as the resident dance company of the Fremont Abbey Arts Center. As Dance Curator for the Fremont Abbey Stevens produced a number of curated dance events and assisted in the mission and launch of dance educational classes, workshops and community outreach. Stevens has danced for VOCI Dance, Double Vision, Omega West, Push Up Something Hidden Dance, Westwick Dolder Dance Theater, Molissa Fenley and Dancers, Penny Hutchinson, and various Seattle, Los Angeles and Bay Area independent choreographers. In February 2009 she joined master choreographer Molissa Fenley, as an associate artist, at the Atlantic Center for the Arts. The versatility of Stevens ability has been seen on the stage with Taproot Theatre, Book-it Repertory Theatre and through a commission by Theatre Puget Sound. Her company, Karin Stevens Dance, collaborates with many local and regional artists, composers, and music ensembles. Karin is also the mother of three daughters! 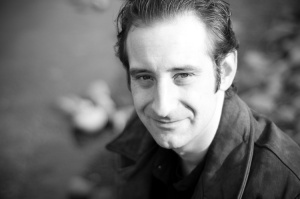 Michael Owcharuk
Michael Owcharuk is a composer, pianist, accordionist, and educator living and working in Seattle, WA. His great love of the wide world of music compels him to work in many genres, including but not limited to: jazz, new music, modern chamber and orchestral music, classical, Slavic folk, rock, pop and music for dance, theater and film. Michael co-directs the Seattle Jazz Composers Ensemble, leads the Michael Owcharuk Trio and Quartet, and is a member of Crystal Beth and the Boom Boom Band and the Workshop Ensemble. He is a ballet accompanist and works as a sideman/pianist/accompanist collaborating with a diverse range of artists.

He holds a Bachelor of Music from Cornish College of the Arts and has received support for his music from 4Culture, The Seattle Mayors Office of Arts and Cultural Affairs, and Jack Straw Productions. Michael and his music have been featured on/by: NPR, KEXP, KBCS, Seattle International Film Festival, Bumbershoot, Earshot Jazz, 14/48 The World’s Quickest Theater Festival, the Seattle Rock Orchestra, the Bushwick Bookclub Seattle, Karin Stevens Dance, and by many other venues and organizations in the Pacific Northwest.

“Michael Owcharuk is a very talented and entertaining pianist who has collaborated with almost all of the leading figures in our productive and accomplished jazz scene. His play has an experimental edge coupled with a strong sense of swing…you can expect to hear jazz mastery.”
(Charles Mudede, The Stranger) 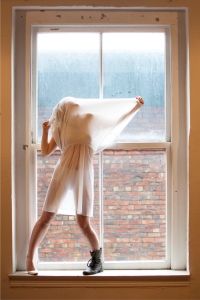 Paris Hurley
Paris Hurley is an experimental performance artist working to externalize the internal through sound, movement, and the transformation of spaces. Her work is centered in anthropological investigation, engaging audiences in a dialogue with their deepest internal programming, questioning and deconstructing social norms / cultural definitions, and breaking the boundaries of self & other.

A classically trained violinist of 26 years, Paris thrives in a wide-array of roles – composing, performing, recording, producing, directing, dancing, and creating with a long list of the Northwest’s most influential artists including Kultur Shock (2008 – present), Jherek Bischoff (2007-present), Degenerate Art Ensemble (2005-2008), Paige Barnes, Shannon Stewart, Salt Horse, KT Niehoff, Vanessa DeWolf, Beth Fleenor, and Samantha Boshnack, among countless others. In 2009, she directed and premiered her first evening-length work, BRIDGING WOUNDS: staying the course of uncertainty, as the inaugural performance of the Northwest Film Forum’s Live at the Film Forum series. Since this time, her work has been presented in Seattle at On the Boards, CityArts Fest, the Henry Art Gallery, Seattle Center, Seattle University’s Hedreen Gallery, Velocity Dance Center, Project: Space Available, and the James Washington Foundation.

Through her various projects and manifestations, Paris has toured extensively in Bosnia, Croatia, Serbia, Macedonia, Turkey, Slovenia, Romania, Russia, Bulgaria, Greece, the UK, Germany, France, Italy, Hungary, Austria, Switzerland, the Netherlands, Denmark, Belgium, & the US, and has performed in some of the world’s most esteemed venues, including Lincoln Center and Carnegie Hall. She is currently engaged in an ongoing exploration of cultural mythologies, personas, ritual, and our collective performance of man, woman, beauty, ‘sexy’ & sexuality through the lens of the individual and societal impact of shame. 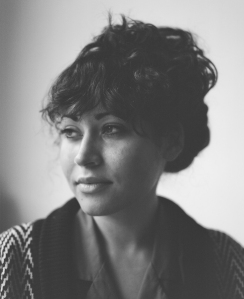 Hanna Benn
Hanna Benn is a Composer and Vocalist currently residing in Seattle,WA. She is a graduate of Cornish College of the Arts where she studied composition and sacred vocal music. She is the lead singer and co-founder of Pollens (Tapete Records), a Seattle-based experimental pop band. Her works and arrangements have been performed by various ensembles including St. Marks Cathedral Choir (Seattle), Indianapolis Symphony Orchestra, the CMF Festival Orchestra, Saint Helen’s String Quartet, Seattle Chamber Players and Opus 7. She is currently on commission with the Northwest Symphony Orchestra and a recipient of the National Science Foundation grant to create a site specific work.

A Series of Pairings Rooted in Sound